22. An organization has received the IPv6 network prefix of 2001:db8:1234::/52 from their ISP. How many subnets can be created from this prefix without borrowing bits from the interface ID?

23. Match the application protocols to the correct transport protocols 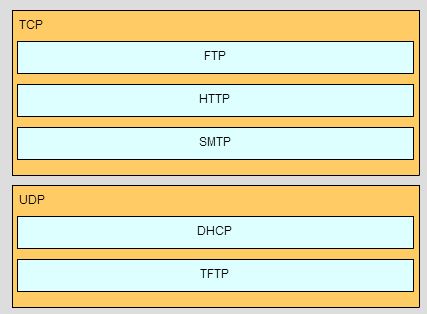 24. Open the PT Activity. Perform the tasks in the activity instructions and then answer the question.

What is the secret keyword that is displayed on the web page?

25. Open the PT Activity. Perform the tasks in the activity instructions and then answer the question.

Which IPv6 address is assigned to the Serial0/0/0 interface on RT2?

26. What is the purpose of a routing protocol?

27. ACLs are used primarily to filter traffic. What are two additional uses of ACLs? (Choose two.)

29. Which statement describes a route that has been learned dynamically?

31. Which three advantages are provided by static routing? (Choose three.)

32. What is the most likely scenario in which the WAN interface of a router would be configured as a DHCP client to be assigned a dynamic IP address from an ISP?

34. Which two factors are important when deciding which interior gateway routing protocol to use? (Choose two.)

35. Refer to the exhibit. How many broadcast and collision domains exist in the topology? 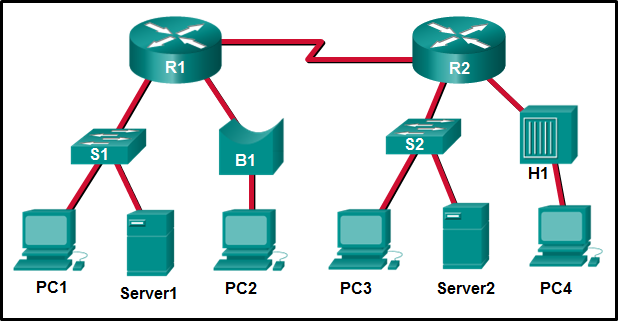 36. A network contains multiple VLANs spanning multiple switches. What happens when a device in VLAN 20 sends a broadcast Ethernet frame?

37. What does the cost of an OSPF link indicate?

38. A small-sized company has 30 workstations and 2 servers. The company has been assigned a group of IPv4 addresses 209.165.200.224/29 from its ISP. The two servers must be assigned public IP addresses so they are reachable from the outside world. What technology should the company implement in order to allow all workstations to access services over the Internet simultaneously?

39. Which information does a switch use to keep the MAC address table information current?

40. Open the PT Activity. Perform the tasks in the activity instructions and then answer the question.

Fill in the blank.

Do not use abbreviations.What is the missing command on S1?